The History of Osgodby Primary School

Osgodby Primary School has a very chequered history and according to local archives two quite separate and different schools have occupied the same building successively. When the building was first erected in 1868, it housed a Church of England Infants School until 1872, then, in 1876, the Governments Education Department established a non-denominational Mixed Board School.

In 1869, when the school opened, the first entry in the log reads: I, Louisa Pratt, aged 18 years, commenced duties as Infant Mistress of Osgodby School. By the time February came Miss Pratt had noticed an improvement in the manners and habits of the children, although punishment was meted out for fighting, throwing stones, damaging fences and furniture, dirtying school during dinner time, inattention during natural history and climbing hedges. 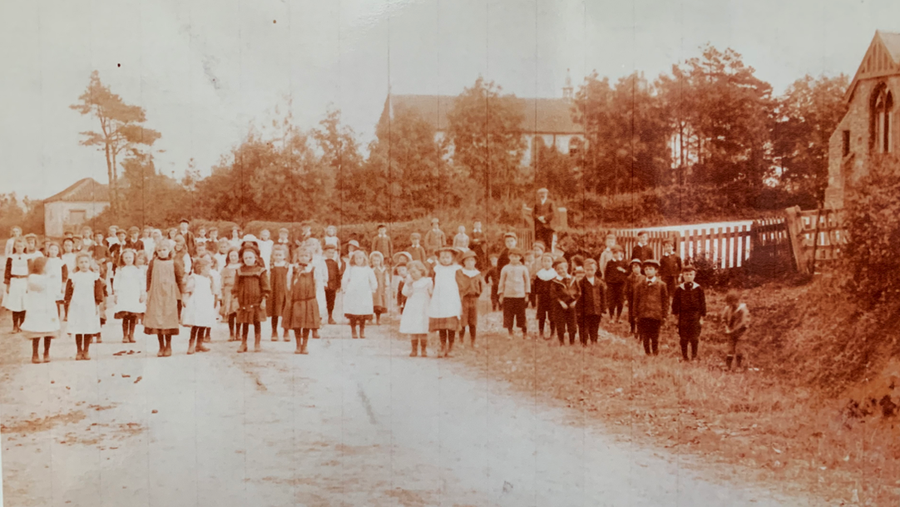 The original school building was measured in March of 1870 by Mr Procter who lived in the village. Its length was 30 feet, its breadth was 16 feet and its height was 11 feet 4 inches. Suffice it to say that the present building is a tad bigger now with a kitchen, a staffroom, an office and four classrooms where eighteen members of staff undertake their duties and 70 children attend lessons.

By 1872 the average age of pupils attending Osgodby School had risen and the Inspector reported to the Education Department My Lords can no longer recognise this school as an Infants School as nearly half of the children on the books are over 7 years of age. They therefore call upon you to convert your school into a Mixed School. It took four years for this to happen, but in 1876 , happen it did and here it stands today as a primary school for children aged between 4 and 11 years of age. 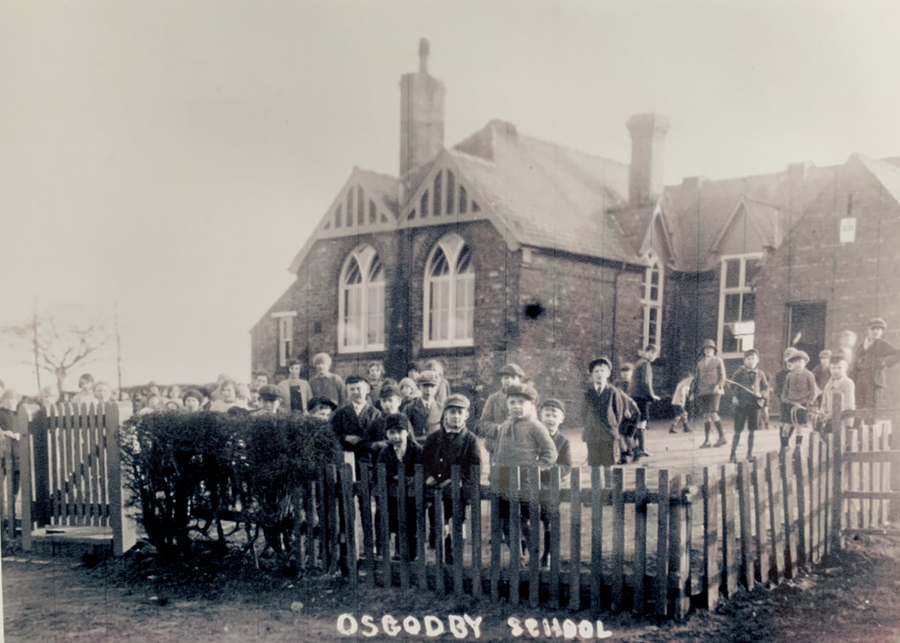 From its time of opening, Osgodby School has had a succession of headteachers but none have stayed as long as Mr Arthur Mumby who, with his wife as infant teacher, managed to clock up over 35 years of devoted service. Under the leadership of Mr Mumby, the academic reputation of Osgodby School was spreading far and wide and by January 1910 there was a total of 106 children attending.

In 1913, the Stamford Mercury reported that Osgodby School is taking up experimental work on behalf of the County Council in the way of hand and eye training. Sir Robert Morant at the Department of Education had a liberal outlook and encouraged teachers to be free to try to work out their job in their own way; Mr Mumby took him at his word and ran Osgodby School along those lines. 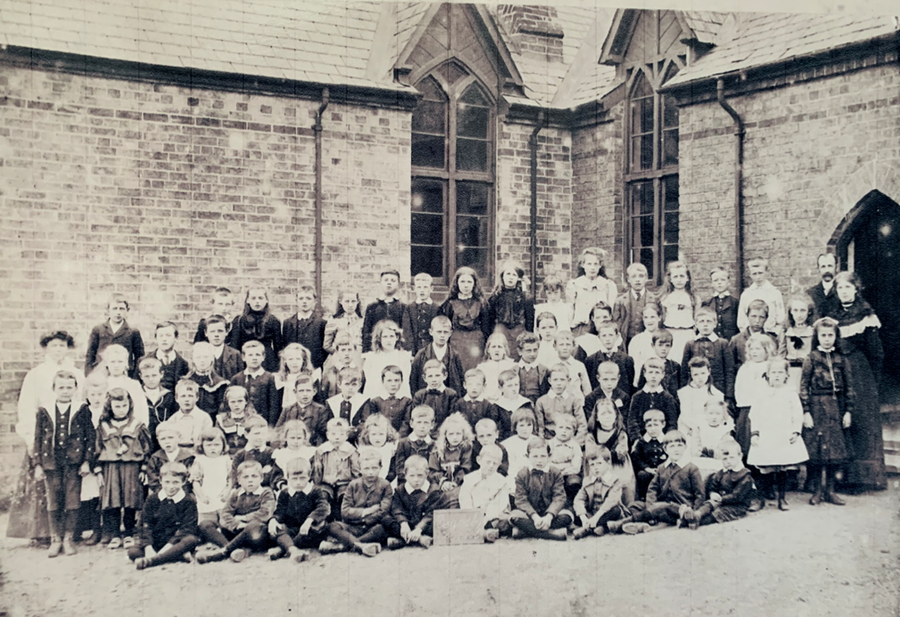 Gardening was, and still is, something the children are encouraged to undertake but we cannot match the achievements of the school as recorded in 1916 when 58 cabbages were despatched for the use of naval men as part of the war effort, and 80 eggs were donated to hospitals caring for wounded soldiers. And all this amidst setbacks like bullocks breaking the fence, sheep entering the garden and rabbits and bad weather damaging the crops, not to mention the hostile aircraft attacks. Lincolnshire was well within the range of German Zeppelins and although they came over low enough, none were ever actually shot down, although poor old Mr Mumby did catch a chill one night when he was on duty as a Special Constable during a Zeppelin raid.

In 1921, Mrs Mumby retired, perhaps driven too hard by family illnesses, tragedies and troubles as well as by teaching too many infants in too small a classroom in an atmosphere of unwashed children, damp woollen socks and chalk and coke fumes. Sadly she ended her days in a wheelchair. Fifteen months later on March 29th 1923 Arthur Mumby also retired and was presented with an oak clock, a gold watch and a watercolour depicting a well known scene from Bishop Bridge. A silver tea service which was presented to the Mumbys upon their retirement still resides in the school archives. Mr Mumby died in 1944 but his involvement in parish and school life is well recorded in the log books and the minutes of the parish council. 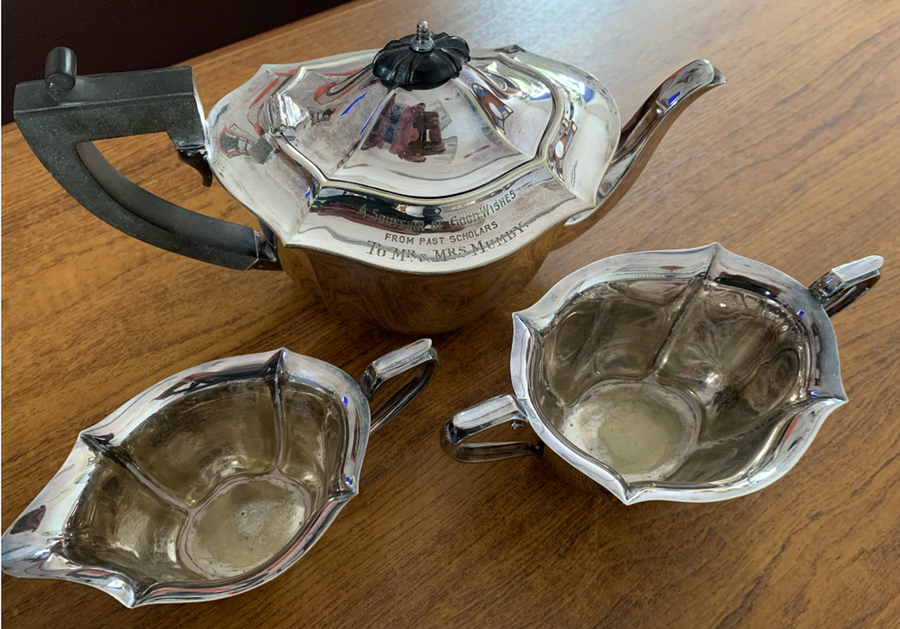 A whole new chapter began when Bert Coles took over from Mr Mumby; and he was followed by a succession of headteachers.

This potted history of the school has been taken from a book written by Alan Wilkinson and Rosemary West who both live in Osgodby. Their book is a wonderful record of school and village life up to 1923 and includes photographs and plans of the school, its staff and pupils